Graham Charles Arthur Sadlier BRUERE was born 1834 in Bombay, India, the only son (he had 5 sisters) of Judge James Graham Sadlier BRUERE (1807-1871) of the East India Civil Service and Augusta BANNERMAN (1808-1889).
* One of Graham's sisters, Fanny Bertha Maltby Bruere (1848-), married Charles Arthur Haythorne Montague, the Montague name given to one of his grandchildren, by his son Robert (child 5 below)
* Their father, James Graham Sadlier, was 1 of 13 children of William Sadlier BRUERE & Harriet BOLTON of Yorkshire
* Their mother Augusta was a daughter of John Alexander BANNERMAN & Ann WEST

20 March 1860 The celebrated clipper ship Blue Jacket, Captain Hugh Clarke, arrived in harbour about midday on Friday last from Liverpool, which post she left on the 26th of November, and has therefore had rather a long passage of 111 days. No ship bringing an increase to our population ever arrived here in a more creditable state, and the passengers are unanimous in their expressions of approbation and esteem for the Captain and Officers, and thankful for the constant attention to their comfort. Two deaths of infants occurred, and there were two births, otherwise the ship was very healthy.

20 March 1860 We, the undersigned, intermediate and steerage passengers on board the ship "Blue Jacket", from Liverpool to Auckland, beg to testify our grateful sense of the kindness, urbanity and attention, of Capt. Clarke, as exhibited by him to us, during our voyage, and would assure him that our feelings with regard to him, are of the highest respect, esteem, and regard. We would also express our great admiration of the nautical skill, and seamanlike conduct, displayed by him on all occasions, and we would fondly hope, that he will be long spared.
We would also acknowledge our high estimation, and respect for his chief officer Mr Curran, who, by his prompt and energetic character and gentlemanlike manners, has greatly increased the safety and comfort of all on board; which qualifies, we feel assured, will at no distant day place him in a position, which he is every way capable of filling.
We would likewise express our high appreciation of the dispositions and sailorlike qualities of his second and third officers, Mr McMahon and Mr Nelson, who, we have no doubt, will speedily rise in the honourable profession which they have chosen.
In taking our leave of Capt. Clarke and his officers we bid them a hearty farewell, and wish both him, and them, every success and prosperity in the arduous duties of their profession, and which their merits in no ordinary degree entitle them to. March 13th, 1860 (signed by 70 Intermediate and Steerage passengers)
photo the Blue Jacket 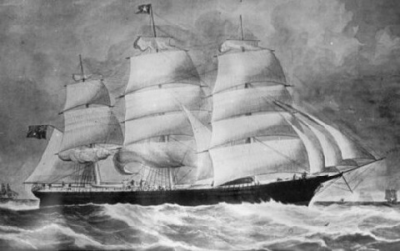 . She was chartered by the White Star Line and built at East Boston, U.S.A. in 1854. She was a medium clipper well known for the lavish decoration of the staterooms and saloon. She served in the Liverpool and Australia trades. She was named after the "Blue Jackets", a traditional name for sailors in the US and British navies. In 1869 Blue Jacket left Lyttelton, NZ, with a general cargo that included flax. On March 5, off the Falkland Islands, the flax caught fire. Four days later, on March 9, the ship was abandoned. On March 16, the barque Pyrmont of Hamburg rescued the crew. There were 9 survivors who managed to guard 15,000 pounds sterling of gold from the ship. 21 months after her loss, the figurehead was found washed up on the shore of Rottnest Island, off Fremantle, WA, about 9,700km from where she burned.

Grahem BRUERE married Elizabeth GOSS on Xmas Eve 1874 in New Zealand
* he was aged 40, Elizabeth was 20
Elizabeth was born in Devon, England. She emigrated into Lyttelton, Christchurch on 29 Aug 1874 (just 4 months prior to marriage), on the "Cathcart" She was 20
NOTE Elizabeth travelled as Goss but it is suggested she was born a McKenzie, which could mean she had married previous to emigration

Arrival of the Cathcart A remarkable passage was made by the fine iron clipper Cathcart to Lyttelton in 1874. A ship of 1,387 tons, built four years previously by Robert Steel, of Greenock, she sailed from London with 481 Government immigrants on the 11th June, and from the Downs three days later, making the passage in 70 days 12 hours to the Snares, and arriving at Lyttelton on the 29th August, 76 days from the Downs to port. The equator was crossed on the 21st day out. On the 28th July she made a run of 304 miles, and the following day 293.

Mutiny on board Cathcart
Four of the crew of the Cathcart having during the voyage broken into the fore-hold, broached cargo and secured drink; one of them was brought aft and placed in irons; another, having attempted to rescue him, was also taken in charge, but while being secured the first prisoner escaped to the forecastle. Captain Crawford and the officers going forward to recapture him, were prevented from doing so by several of the crew, who made use of threatening language. The Captain, finding that the mutineers would not listen to reason, returned to his cabin, and after deliberating with his officers, armed himself and went forward the second time. Finding the doors of the forecastle closed, he demanded admission. Previous to this, part of the crew had left the mutineers. Those within refused to open the doors, threatened the Captain, and said that they meant shortly to be masters of the ship. Argument was useless and the door on the starboard side of the forecastle was, in spite of much resistance, partly forced open with hand spikes, and the Captain, again warning the mutineers, fired three times amongst them, three of them being wounded. An entrance was effected and the mutiny quelled, the ringleaders and others being placed in irons. On the arrival of the ship at Lyttelton the men were brough before a magistrate and charged with endeavouring to make a revolt. Four were sentenced to twelve weeks' imprisonment with hard labour, and two to one month additional for assaulting the Captain.


Graham Charles Arthur Sadlier Bruere died suddenly of Heart Disease at Stanwell Farm, Balcairn, on 28 April 1896 aged 62
* his baby daughter Annie was just 5 days old
SUDDEN DEATH
Mr Graham Bruere, farmer, of Mount Grey Downs, was found dead in bed this morning. His health was usually good, but yesterday, not feeling well, he consulted a doctor at Rangiora, being the first time in his life that he had sought medical advice. He retired last night in a condition that gave no cause for anxiety and the position he was found in this morning led to the supposition that he passed away peacefully in his sleep. Mr Bruere was was advanced in years, was an old and highly respected settler. He leaves a widow and large family well provided for.
* He is buried with Elizabeth & son Charles (see next)


Graham's Bio was taken from NZETC (link below)
Mr Graham Bruere, sometime of Balcairn, was born in Bombay, India, and was the eldest son of Judge Bruere. He was taken to England when three years old and educated at Westminster. On leaving college, he studied law, but the confinement was unfavourable to his health, and he joined the army, in which he served for one year in Ireland. Finally he made a choice of New Zealand, and came out to Auckland in the ship "Blue Jacket". He purchased a large run, which he disposed of in 1859, when he came to Canterbury and settled near Sefton, where he took up land in its native state. The land is still in possession of the family. When it was first settled roads were few and far between, and bridges were almost unknown. Mr Bruere removed to Balcairn in 1892 and increased his area to about 1600 acres. He was for many years chairman of the road board and a member of the school committee. Mr Bruere was married, in 1874, to Miss Goss and died at Balcairn on the 28th of April, 1896. He left six sons and five daughters