DEWSBURY GROOMS
Benjamin Dewsbury (1839-1905)
* born Stirlingshire, Scotland, a son of Benjamin Dewsbury (1801-1886) who emigrated into Lyttelton, 1 of 460 passengers, on the 'Chariot of Fame', 29 Jan 1863. He is listed as a 61 year old, single Clerk. Benjamin (senior) was not a 'Government Immigrant'. He paid £10 15 for his passage, while his friends 'already in the Colony', paid £48. Travelling with him were his children; Maria aged 25, Agnes aged 19, Frederick aged 17 & Henry aged 12. This Benjamin (jnr), who would have been 23, was not with them so we may assume he was already in New Zealand and was the one who paid for his family to emigrate.
* brother of Rev Henry Rohan Dewsbury (1849-1926)
* in 1860s was in partnership with Artemas Candy and James Jones as Clothiers & outfitters, in the firm "Jones and Company"
* in 1880s was in business with his brother, Frederick Charles Dewsbury, as Dewsbury Bros, of Christchurch, Woollen Drapers & Outfitters

Death of BENJAMIN Dewsbury
Press, 8 July 1905
OBITUARY - Mr B. Dewsbury The death is announced, at his residence in Richmond terrace, Christchurch, of Mr B. Dewsbury, after an illness of some weeks duration. The late Mr Dewsbury, who was 67 years of age, was an old identity of Canterbury and was in business many years ago with a brother as a clothier and tailor at the corner of Gloucester and Colombo streets. At the time of his death he was in the service of Messrs H. Ballantyne and Co. He was a brother of the Rev H. R. Dewsbury, the well-known Christchurch Methodist minister and was a member of the Methodist Church.
The late Mr Dewsbury leaves a widow (now on a visit to England with her brother, Mr G. T. Booth) and two daughters to mourn his loss. The funeral will take place this afternoon at the Addington Cemetery.
* he is buried in Plots 131A & 131B, Block O, with children Ernest, Benjamin, George, Harry, Isabella & Winifred. Twins Jane & Kate are buried together in a small unmarked infants grave, Plot O, Block O, at Addington
Of interest, Isabella's parents, George & Jane Booth, are buried Plots 130A & 131C, Block O at Addington, Christchurch (family plot?) 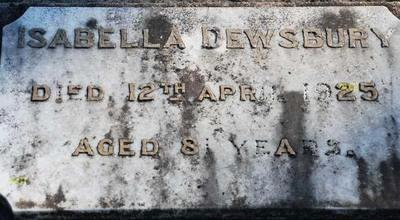 photo Dora Jane Dewsbury in Christchurch 1876-1880. Dora (aged 40) & sister Gwen (aged 23) were the only children surviving when their father died. 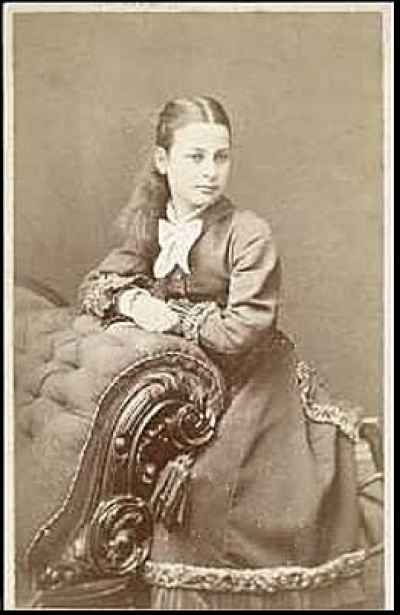