Edward McMenamin was born in 1835 in Lifford, County Donegal Ireland
son of Patrick McMENAMIN & Annie McGOWAN
* Patrick was a Stonemason

Edward married on 3 Sep 1860, in Melbourne to Jane BROWN
* Jane was born 1839 in County Tyrone, Ireland
daughter of Robert BROWN & Isobella KNOX
* Robert was a Farmer

They arrived into Auckland, via Melbourne about 1864
* He was, for a time, a Gold Miner in Thames, Coromandel

. 5 .
1870 - 1949 Isabella Margaret McMenamin
married Stanislaus John WHITEFORD 3 Aug 1905
* Stanislaus was a hotel proprietor, of the Breakwater Hotel New Plymouth (1911), the Post Office Hotel Palmerston North (1913, transferred to Fred Bershaw Tutte in 1914), the Central Hotel, Lambton Quay, Wellington (1914, transferred to George Macdonald in 1916), the Albion Hotel in Patea (1920, sold to Mr O'Sullivan of Pahiatua in 1924), the Victoria Hotel Petone (1924) the Duke of Edinburgh Hotel on Willis St (1927), the Post Office Hotel on Grey St, Wellington (1930, transferred to Alfred Lulham in 1933), the Hotel Regent on Manners St (1935). Also in 1935 he made a permanent transfer of the Commercial Hotel in Pahiatua to W. C. Coldicutt.
Then in June 1938 Stanislaus John Whiteford was a passenger to Sydney on the 'Wanganella'. Four months later, in Oct 1938, Stanislaus John Whiteford, Mrs Whiteford & Miss Mary Whiteford were on the 'Awatea' to Sydney where they settled and Stanislaus again ran hotels (see his obit below).
their known children
* 1906 - Stanislaus John Whiteford
... + Hyacinth Dominica Davidson (1902-) in 1938
* 1908 - Mary Margot Whiteford
* 1909 - 1981 Norton Bede Whiteford
... + Marjorie Edna Amyes (1913-1968) 1938
* 1914 - 1991 Dermot Vincent Whiteford
... + Kathleen Mary Conrick (1912-1956) 1938
NOTE The 3 Whiteford brothers married in 1938; Norton 16 April, Dermot 6 June & Stanislaus 17 Sep
* Stanislaus John Whiteford (snr) died 6 Sep 1947 in Petersham, NSW
The Forbes Advocate, 12 Sep 1947
Monday's "S.M. Herald" contains a notice concerning the death of Mr Stanislaus John Whiteford, aged about 70 years, a former resident of Forbes, where his father Michael was a maintenance man for the Public Works Department before the introduction of shire councils. The deceased was for a time proprietor of the Imperial Hotel, Annandale and leaves a widow and family of four children. He had a brother who was drowned in the Lachlan River at Cowra while the family was residing at Forbes.
ISABELLA died 12 March 1949 in Newtown NSW.
* they are buried together, Roman Catholic Monumental, Section 5 - 0576 at Woronora Memorial Park, Sutherland, NSW

. 6 .
1872 - ? Dora McMenamin
born 6 Oct 1872
* nothing else known.
* In 1887 a Dora McMenamin was in Standard IV at St Joseph's School, Willoughby street, Thames and received a prize for arithmetic.
It's also possible 'Dora' was Dorothea (see next) but the ages recorded are wrong in death etc.

. 8 .
1875 - 1893 Daniel Patrick McMenamin
in 1890 at the age of 15, Daniel sat the Annual Examination of the Thames School of Mines and passed Chemistry of Agriculture 83.2%
* he was a member of the Thames Miners Union and he enjoyed playing cricket, his team was the 'Rovers'
DANIEL died aged 18 of measles on 5 July 1893, at 'Bird-in-Hand Hill' Thames
Evening Post, 8 July 1893
We regret to have to record the death of the only son of Mr Edward McMenamin, of Bird-in-Hand Hill, a promising young man 18 years of age, owing to measles. Much sympathy is expressed for the parents in their bereavement. The funeral will leave the residence at 2.30 o'clock to-morrow afternoon, and as deceased was a member of the Thames Miners' Union, the members are requested to attend
* he is buried Plot 839, Shortland Cemetery Thames with brother Charles

In 1892 Edward said that when he first came to the goldfield a miner's right entitled its possessor to a residence site and also the power to mine on the goldfield. Mr Cadman replied that this was the law at present

In 1899 Edward was on the Committee of the Miners Union.
Also in 1899 he and 7 other resident's complained of the deplorable state of the roadway being in an impassable condition near Mr Morrison's residences due to the drain being choked up and there being no proper outlet for the water 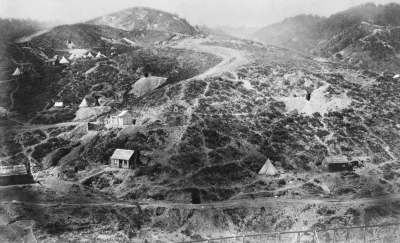 Edward McMenamin died 4 June 1918 aged 83 in Eltham, Taranaki
Thames Star, 10 June 1918
The death is reported from Eltham of Mr Edward McMenamin, one of New Zealand's early pioneers, at the age of 83. His name was associated with those who took an active part in quelling the native disturbance at Parihaka about the year 1883. He had resided in New Zealand about 54 years, sixteen of which he spent in Eltham.
Mr Edward McMenamin who has just died aged 83 years, emigrated from Ireland to Melbourne, then came across to Auckland, about 54 years ago, and went to the Thames goldfields rush. He was one of the volunteers who went to Parehaka during Te Whiti's troubles. For the last 16 years he has lived at Eltham.
OBITUARY We regret to report the death on June 4th of Mr E. McMenamin, who for over 40 years was a resident of Thames, but who lately resided at Eltham.
At about 7.15 on Saturday evening (June 1) an accident happened to Mr E. McMenamin, of Mills St., Eltham. It appears that the old gentleman was walking along when he was knocked down by either a cyclist or motor car. The culprit did not stop to ascertain the result of the collision or to render any aid that might be necessary, but proceeded on his way. After obtaining assistance, Mr McMenanin was removed to his home, and Dr. Cooper was speedily summoned. The doctor found that although there were no bones broken, Mr McMenamin was badly bruised on the back and left leg. As the victim's age is eighty-three years he is naturally suffering severely from shock. It is to be regretted that so far, no trace of the offender has been discovered. Apparently Mr McMenamin's death was the result of the accident ...

I am researching the McMenamins and was very excited to find your research on Edward McMenamin and Jane Brown. They are my maternal great grandparents. Helen Elizabeth McMenamin is my grandmother. I'm pretty sure my grandfather's name is Henry Dyson Shepard.(Please note Shepard is the correct spelling.) My mother was Joan Russell Shepard. Hone Shepard died when he was a child. Patrick Shepard's name was Henry Dyson Shepard who we called Uncle Pat. Richard Shepard was William Lindsay Shepard who was known as Dick. He was killed in action during WWII.

Do you have any earlier information on Edward Mcmenamin and Jane Brown eg their parents.

My sons are descended from Annie Dorothea (Dora) Jones, daughter of James Wilson Jones and Sarah Winifred McMenamin. I am having a blitz on getting their family tree together and I was delighted to find your page. I Would be pleased to hear from you. By now you will probably have found details of Sarah's birth in Australia, her marriage etc but, if not, I would be happy to give them to you.

In matching up bmd info with family names I find :

I would be grateful if you (or anyone else researching this tree)could confirm that Edward was called Jack.

I am a descendant of Isobel Kneebone, which was a daughter of Dorothea Mcmenamin and William John Kneebone. I have been researching my connection to Ireland these past months and I have now finally made a connection. I am the seventh generation to Dorothea Mcmenamin and my great grand-mother was Dorothea Bailey (nee Walsh), who was the daughter of Isobel J Kneebone.
Any further information about our history in Ireland would be greatly appreciated.
Kind regards.