Hello,
I am researching my family tree and writing my Family History for my Grandchildren. My late Grandmother was Adelaide Smithers (nee Cosier). She was born at Molong NSW and raised at Rylestone, south of Mudgee NSW be her grandparents Mathew and Annie Cosier. Her mother, Annie Emma Cosier and Biological father, Henry Rose, were not married at the time so they were sent packing and Adelaide was raised by her grandparents. Her Grandfather was Henry Charles Cosier who was a bit of a lad. I am trying to find out the history of Henry as we are told the Cosiers escaped France during the French Revolution. They started businesses in England and then one set moved to New Zealand. Henry Charles Cosier started many businesses, one involved selling alcoholic cordial but repeatedly went bankrupt. He applied for election to the NZ Canterbury Council extolling his honesty and business acumen!!! He also tried Tasmania and failed again and moved to NSW where he worked at Bathurst before doing 6 months goal time at Inverell for Larceny. He eventually retired at Rylestone.

So, I am very keen to try and track down when and where the Cosiers came to England, and when they came to NZ so, any documents, links or even photos would be much appreciated.
Kind regards

Trevor Ellis.
ps. The attached Tree is not mine, but one that I found on the Web. It is accurate however. 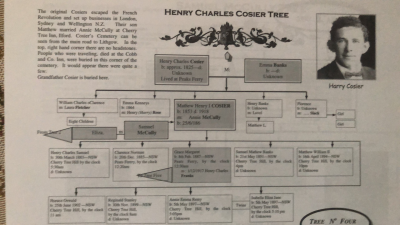 >> Sign in or Sign up now for free to remove this ad!
Surnames: COSIER
Viewed: 331 times
Likes: 0

BigTrev52 has been a Family Tree Circles member since Jul 2021.

I have not done any research into the Cosier's as they are in-laws. On my tree is Mathew Henry COSIER 1853-1918. His father Henry Charles Cosier 1830-1883 died at Bundaberg, Q. married in Collingwood, Victoria in 1852. I did read a lot about the scoundrel but unfortunately nothing to do with his arrival. I looked through a criminal deposition book but it didn't show arrival.
Sometimes on death certificates they state length of time spent in the colony, beneath place of birth.
try searching Public records in Victoria
P.R.O.V


his name was sometimes misprinted as Cosies

Many thanks for that. I would love anything that you might recall. He was my 3 * Grandfather!!!

I've been told you might get some information from the Gilgandra Museum. I don't know which one, I believe there are several. Perhaps the Rural. Try calling the library there and ask them;
Phone: 02 6817 8877
Email: library@gilgandra.nsw.gov.au
Address: 1 Warren Road, Gilgandra NSW 2827

That was good advice. They have already sent me some new information and are going to put me in touch with some of the surviving Cosier family in the area. Given I am in Sydney and we are in Covid lockdown, there is zero chance of us visiting there, even though my wife and I are now vaccinated.

The photograph you have posted here on the Cosier tree is a young man in a collared shirt with a pre-tied bow tie. The tree information I have found to be correct however the photograph which I have just viewed in Ancestry, isn't; it appears to be on film rather than plate. Because Henry Charles Cozier was born in 1825 and died in 1883 it couldn't possibly be him; perhaps a grandson.
There would be gaol photographs. Have you tried searching the National archives. When you next speak to the librarian, ask where the Inverell Gaol records are?
Quote from 1884;"Inverell gaol, a tumble-down place, and from
which, if criminals escaped, not the slightest fault could found with the gaoler or
his assistant, as anyone could make his way through one of the walls"