Our forefathers were talked of mainly as Quarrymen and Farmers living (at least since the 1840’s) in and around the small village of Crosland Hill a parochial district of Lockwood and Almondbury in the township of Huddersfield. Lying to the west side of the town on the hillside edge of Crosland Heath between the valleys of Colne and Holme, Crosland Hill was nationally known as a quarrying district, extracting good quality ashlar and ancillaries from the Gritstone/Sandstone beds.

Recollections of Fred Mellor b. 1924 Huddersfield UK
My Grandfather Fred married in c.1895 Ada Whiteley, a weaver from Linthwaite and later acquired land and a farmstead, Felks Stile Farm. The homestead of mainly a large barn and a smaller house was located at the top of Quarry Road where it joined (with a farm gate and a lovely stone stileway) Felks Stile Road, the link between Blackmoorfoot Road and Church Lane, Linthwaite. It has mostly gone now. The farm in ruins, the land we farmed and quarried taken over by the spewer factory (Standard Fireworks Ltd) who have steadily expanded their holdings between the village and Crosland Heath Golf Course since the Great War. The village has changed too except for the principal dwellings on the main street, the Manor House and the Chapel, most of the quarries filled in and a large caravan sales area dominates. Samuel Johnstones Quarries were still active and expanding south along Thewlis Lane when I last visited, but the old sites of J. Wimpenny &Co., Mallinsons, Boothroyds, Hirst & Mellors, and Bates’s Quarries, have all suffered the straits of progress, buried under recreation and housing.

About 1873 William built a block of 4 houses midway along Crosland Hill Road, 2 semi’s back to back. He and his wife occupied the right-hand one, looking from the street and rented out the other three. As his three sons grew up, Squire married Ellen and inherited the family house, Fred married Ada and inherited the house next door. William emigrated to Australia, and I suppose Squire and Fred would share the rents from the 2 houses round the back. Squire and Ellen had only one son, Brook 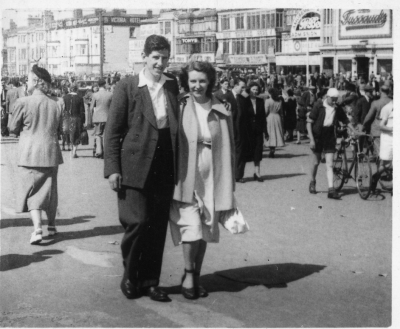 >> Sign in or Sign up now for free to remove this ad!
Surnames: MELLOR
Viewed: 134 times
Likes: 0

geon has been a Family Tree Circles member since Mar 2021.