Update: This one I consider to be solved and as I suspected, would be John Sellars Cameron (1906 - 1956) and Muriel Mary Cameron (1907 - 1961); 2 children of John Hendry Cameron and Constance nee McGarvey. I think the most likely theory is that the photographer had a traveling studio at times in his career.

I don’t often post here these days because I am pretty good at cracking most cases that look impossible. However I am stumped by this one. A portrait noted to be of ‘Muriel and John Cameron’, taken in Greymouth on the West Coast of New Zealand’s South Island.
The photographer is James Ring (1856-1939). Ring headed to Greymouth soon after arrival in New Zealand and operated his independent studio from about 1879 until 1924; so an incredibly long time and this is not particularly helpful for narrowing down dates. There are no other clues to go on, besides the photo looks to have been taken maybe between the mid-1900s to mid-1910s, and the girl, who looks under 2 years old is slightly older than the boy who looks about 1 year old; so assuming they are siblings they were born 1-2 years apart. Both of these data points tee with the only potential match.
Cross-checking Camerons who had children with both these names historically, only reveals one couple, John Hendry and Constance Cameron who had a daughter Muriel Mary Cameron in 1907, and a son John Sellars Cameron in 1906.
However I have zero evidence the Camerons were ever in Greymouth/West Coast/Westland or had any reason to be.
There is a lot of information showing that these Camerons resided in the mid-North Island area over the decades around Wairarapa, Taranaki, Manuatu-Whanganui, and Hawkes Bay. This is where they consistently crop up. References are regular enough it is difficult to believe they ever had a period in the South Island but, it is certainly not impossible; people moved around a lot in those days depending what line they were in. It just looks unlikely they are the same people and there’s nothing to back it up, especially any electoral records. To me it doesn’t look to me like they ever left that central area of the North Island.
Anyway, I thought I’d post this on the off chance one day someone is looking for Cameron family and they can match it with something. Unfortunately ‘Cameron’ was an incredibly common surname, with thousands of immigrants arriving from Scotland in the C19th and many had a habit of naming their children with the same small roster of names, meaning trying to figure stuff out is a hard ask. That’s another point, there is of course the possibility these Camerons could well have been recent arrivals to New Zealand meaning Muriel and John were not born there at all. 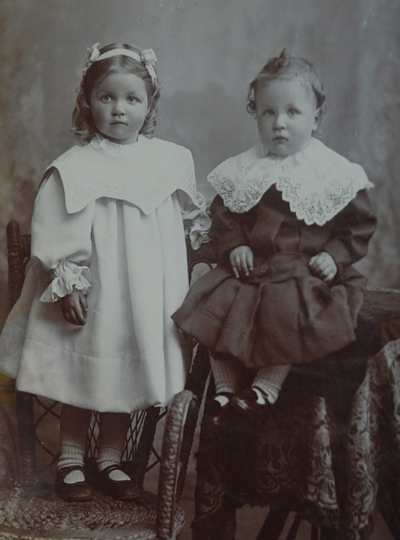 >> Sign in or Sign up now for free to remove this ad!
Surnames: CAMERON
Viewed: 146 times
Likes: 0

The children were born in NZ darian. I will add a little more so someone else may recognise the family and photo. Like you, I have not found them living in the South Island. They may have holidayed there or James Ring may have been a roving photographer for awhile.

So you reckon I've got it then.

I should have placed the link to the auction as the item is currently for sale and shows James Ring's mount of the time.

Another researcher said it is definitely an Edwardian mount, 1901-1910 also fitting in with the birth dates of the Cameron children.

Thanks for the extra information. It lines up with everything I found as well. And I like the 'holiday' theory. It was not unusual for people to get portraits done on trips away. It's possible they were visiting some other Camerons down that way.

Your welcome Darian
Pleased to sort it for you.

Are you buying the photo?