My 2x Grandmother was Alice Reilly daughter of Patrick Reilly and Mary Reilly ( Reilly) from Drumloher, Drumlane, County Cavan. The Baptism record from Drumlane Parish Booke is the only record that I have, 3rd Feb 1861, her Sponsors were Phillip McDonald and Anne Fitzpatrick. The next record I have is her marriage to Michael Connolly on Sunday 12th July 1885, in the Chapel of Milltown, both are 25 and their fathers are Alive, Pat Reilly, Drumloher and Mic Connolly from Cranaghan. Their children were Francis 28 Jun 1887 Cranaghan, Mary 24 Dec 1889 Snugboro, Susan 6 Sep 1891 Drumain, Bridget 21 Sep 1893 Drumane and she is my Grandmother, Elizabeth 4 Oct 1895 Drumane. Michael was a Herdsman. The 1901 Census has them living in house 74 Ballyconnell, Co Cavan but on the 8th of November 1905 Michael died at the age of 40 at Belturbet, County Cavan. 1911 Census has Alice and Son Francis, daughter Eliza and Patrick Reilly aged 75, male, father from Co Cavan, a Widower. at house 4 Lisnadurk Glebe North, Clonkeen, Co Fermanagh. I am trying to find any proof of the family- siblings of Alice or was she an only child. Who was Mary Reilly? was her maiden name also Reilly ? and if there is a death record for Mary. If anyone could tell me the date of death of Patrick Reilly, sometime after the 1911 census and where? I would appreciate any help finding my family. Marie 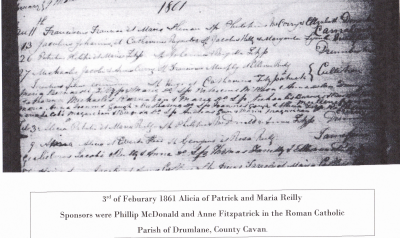 Questions has been a Family Tree Circles member since Nov 2021.