.. 2 ..
1891 - 1918 Edward Maxted
* born 27 May 1891
Edward embarked for War in April-June 1917 as Lance Corporal 45106 with the 24th Reinforcements, Otago Infantry Regiment, D Company, NZEF. His previous rank was Private with the Otago Infantry Regiment, 1st Battalion. His next of kin was his father, Richard Maxted, at Pukerau, Southland.
Edward died of his wounds 1 Nov 1917 aged 26.
Southland Times, 17 Nov 1917
Private Maxted On November 1st Private Edward Maxted, a Winton native and Ashburton schoolboy, who left New Zealand as a soldier in the 24th Reinforcement, died of wounds received in action in France. Private Maxted was 26 years of age and is the son of Mr R. Maxted, of Pukerau, on whose farm he was working when he enlisted. He joined the Kelso Mounted Rifles in August 1910 and later was promoted to the rank of sergeant of C. Company, 12th Regiment (Otago) Mounted Rifles in the Territorials. He was a good shot, having won several prizes at competitions. Private Maxted was a member of the Pukerau Oddfellows' Lodge and had been through a number of chairs. He was a devoted son and brother nad was a general favourite with all who knew him.
He is buried IV.E.74., Longuenesse (St Omer), Souvenir Cemetery, Pas-de-Calais, France.
.. photo.. Private Edward Maxted 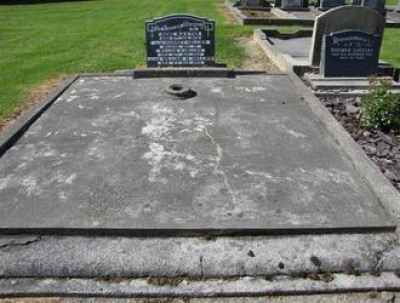 ELIZABETH Maxted died 21 Nov 1894 aged 25. Her children were then: Margaret aged 6.4, Edward aged 3.6 & Harriet 11 months. Not yet found who helped raise them. I don't believe Richard remarried. Descendants may help.
Southern Cross, 24 Nov 1894
WINTON The funeral of the late Mrs Maxted, which took place last Wednesday, was largely attended. Mr Maxted being a right good Oddfellow, as many of the members as possible of the local lodge turned out and joined the procession.
Mataura Ensign, 27 Nov 1894
On Wednesday the late Mrs Richard Maxted, a daughter of Mr Thomas Lampert and a native of Winton, was buried there. Mr and Mrs Maxted left Winton some four or five months ago to start farming at Pukerau, but the latter returned a few weeks ago to die.
* She is buried Plot 29, Old Survey Block 1 at Winton cemetery

22 June 1918 Purchasing land
RICHARD MAXTED, of Pukerau, Farmer, has applied to purchase Section 8, Block L.X., Waipahi Survey District, now held by him under Perpetual Lease. Any objection to the grant of this application may be lodged at my Office at Gore. H. A. Young, Warden.

RICHARD Maxted died 30 Jan 1919 at Eccles St., Gore, after a lingering illness aged 62.
Mataura Ensign, 30 Jan 1919
FUNERAL NOTICE The friends of the late mr Richard Maxted are respectfully invited to attend his Funeral, which will leave Eccles Street, Gore, on Saturday, at noon for the Pukerau Cemetery, passing through Pukerau about 1.30p.m.
* He is buried Plot 13, Block 2 at Pukerau cemetery with his parents.
HEADSTONE
In loving memory of Edward Maxted 1834-1910. His wife Harriet Maxted 1837-1914. And their son Richard Maxted 1857-1919
.. photo ..
The headstone of Richard & his parents Mataura Ensign, 30 Jan 1920
IN MEMORIAM MAXTED - In fond and loving memory of my dear brother, Richard Maxted, who passed away at Eccles Street, Gore, on January 30, 1919, after a lingering illness patiently borne.
Gone from my side, how sadly I miss you,
My dear brother your memory I'll keep,
Never till life's end will I ever forget you,
Dear to my heart is the place where you sleep.
A better brother never lived,
Nor one more true and kind;
His equal in this weary world
You'll very rarely find.
. . Inserted by his sorrowing sister, R. M., Kaiwera