written for delwyns who wrote on 2017-10-25, 05:21:08
.. Harris of Christchurch Rd, Kumara, West Coast, NZ. Am looking for any information on Birth: England 1858 abt - John Harris - d. 1923 NZ / Parents and Siblings. There are other Harris's of Hokitika, and are wondering weither they too connect. Charles Joseph Schumacher and Annie Mary Sophia Harris Adopted my Father.
Many Thanks DelwynS
this journal is added in her post but also added here separately in case she accidentally deletes 😉

Hokitika and Kumara are about 50km apart so I feel it is very possible. Delwyn forgot to add names or dates to help in the search, so have written this journal to help her. Would be grateful if anyone knows anything to please write in comments

** John Major William Harris was 18 years old, living on Christchurch Road, Teremakau, when on the morning of 17 June 1913 he decided to ride to Wainihinihi with his friend, *Richard Boys Harcourt (1896-1945), to get some cattle. He saddled up but got his foot caught in the stirrup. The horse bolted and John was thrown and dragged over the Waimea Creek. He is buried at Kumara cemetery with his father John, a Sophia Harris (1841-1913) who died 5 months after him and 1 month old Colleen Marie Neame (1928-1928), daughter of Walter Henry Neame & Marion Jane Harris (1896-1989).
* note Richard Boys Harcourt was born in Hokitika to Richard Allan Harcourt & Sophia Elizabeth Boys. He was driver NX68400, with the AIF, Australian Army Service Corps, 2/3 Motor Ambulance Company in WWII when killed in Malaysia 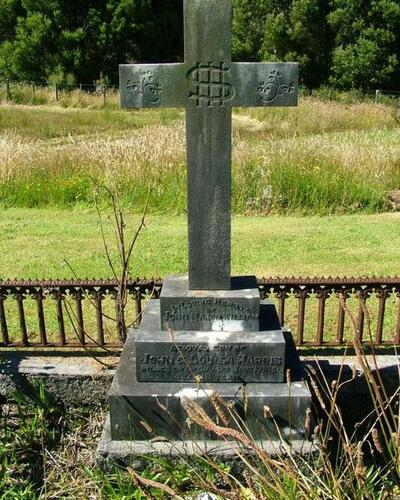 JOHN HARRIS, according to my grandmother, Jane Marion (nee ,Harris) Neame, was born in County Clair, Ireland. His father Frank was a captain in the English Merchant Navy, stationed in County Clair he was Welsh. Frank was concerned that children were all Fenians and returned to Wales. This needs more research. One son moved to the USA & John came to New Zealand. John Harris married Louisa Ridley
1887,he died in 1922 from a back injury, his wife Louisa born 1866, married Ritson Charters, he died in 1956 aged 85yrs. Louisa died 1944 aged 78 yrs. she is buried as Louisa Harris. John & Louisa had 5 children Annie Mary Sophia (m)Schumacher, John Major William died 1913 tragic horse accident, identical twins 1897 Violet (m) Roper & Jane Marion (m) Neame, she had a son to her sister's husband Samy Emil Yde, this is my genealogical line. Frances ws born 1892 & died 1945.Samy Emil & Frances had 3 children Hazel Grace born 1915 no children, died in Auckland. Mary born 1921 died young. & Trevor Victor born 1917, died in England a Sergeant in the RAF,no children.Samy Emil Yde left 2 sons not by his wife.

I hope this helps others in their research.SHON

I have a wee correction to Mary Harris who married Albert. Mary was born Hinepara "Mary" Bannister. She married firstly Hone Te Auhuru "Tati" Mahuika in 1904. After his death in 1935 she married, secondly, Albert Harris. Albert died in 1949 and Mary in 1960. I believe she was probably buried under the name Bannister as that is tradition with Maori to indicate your familial name at death.